Discussed in this post: 6 Books (I Am Woman; Destroyer of the gods; Paul, the Fool of Christ; Come Out, My People; The Ancient Economy; The Rings of Saturn); 1 Movie (Atanarjuat); 2 Documentaries (People of the Kattawapiskak River; Tickled). 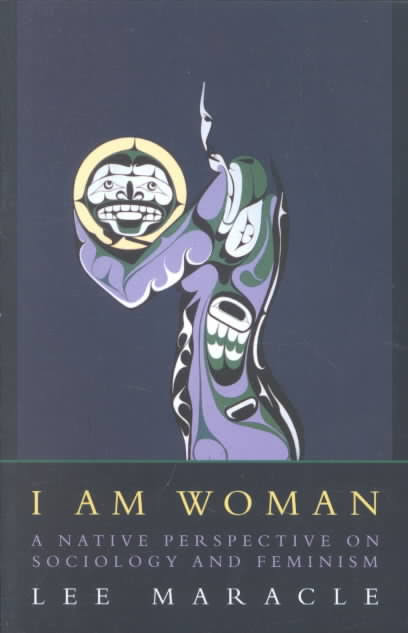 This was a hard book to read.  There are graphic accounts of sexual and domestic violence and child abuse.  It’s a book where daughters witness terrible things done to their mothers and mothers try to find ways to comfort their daughters when their daughters, too, experience terrible things. It’s hard to be a woman in an exploitative system that is patriarchal and founded upon the dispossession, disempowerment, and dehumanization of women.  Harder still to be an Indigenous woman in a world colonized by an illegal settler State called Canada.

This is also not a book written for me.  It’s written for Indigenous women or Indigenous people more generally.  I’m allowed to listen in, but I’m not the intended audience and the author doesn’t carry any particularly high hopes that a fellow like me reading this book will then do anything different or better or more useful.  I’m neither the target audience nor an element of the solution.  Which is probably why it’s good for me to read it.

This is a book about solidarity, resistance, and liberation.  It’s a book of love and rage.  It’s a true story.

2. Destroyer of the Gods: Early Christian Distinctiveness in the Roman World by Larry W. Hurtado. 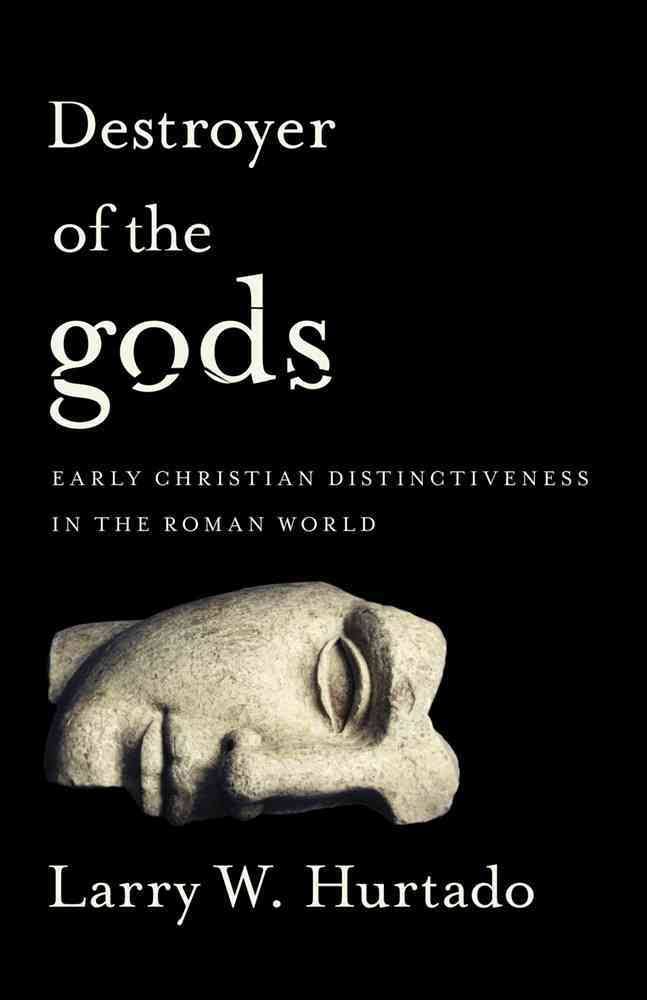 Although, not a formal review (when are my reviews ever formal reviews?), I already wrote a sustained response to this book here.  I won’t add to that now, but I have been having a conversation with Dr. Hurtado about his book and my response, so maybe he’ll be down for me to share that.  We’ll see how it goes.

3. Paul, the Fool of Christ: A Study of 1 Corinthians 1-4 in the Comic-Philosophic Tradition by L. L. Welborn. 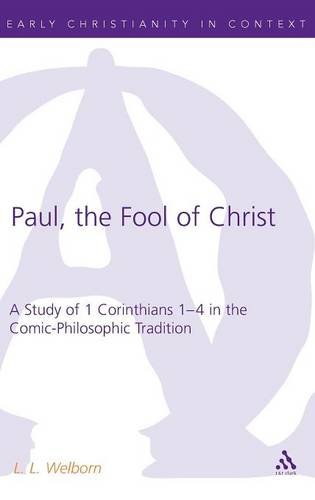 Larry Welborn very kindly sent me a copy of this book.  I enjoyed it a great deal and it really drives home the point I make about Hurtado’s negligence of the cross in his study of “early Christianity.”  Welborn’s focus is upon the foolishness of the message of the cross as that is discussed in 1 Cor. 1-4, and his scholarship is top notch.  I will be posting an interview with Welborn about this book soon, and so I won’t write anything else about it for now.

4. “Come out, My People!” God’s Call out of Empire in the Bible and Beyond by Wes Howard-Brook. 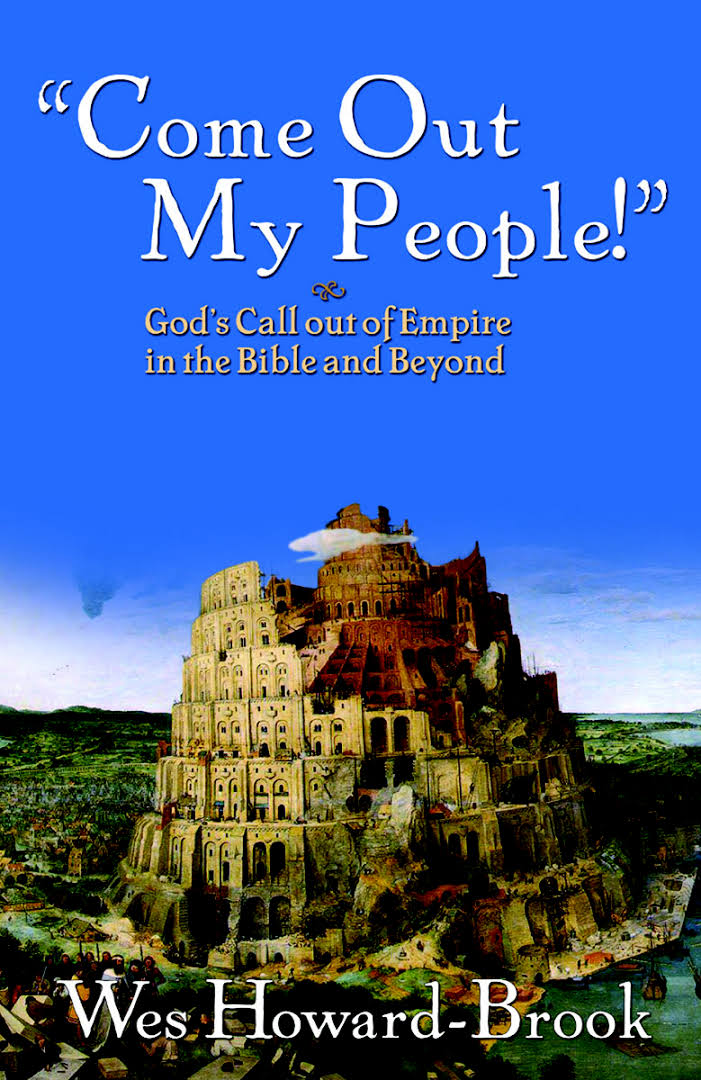 Another book that I read in order to interview the author (I’ll be interviewing Wes about this one and about Empire Baptized, which I’m just wrapping up now), so I won’t say too much now.  However, I will say that I’m pretty damn impressed with the scope of this work.  To try and go through the bible, cover-to-cover (although not in that order), in order to explore what Wes calls its internal conflict between “the religion of empire” and “the religion of creation” is a massively daunting task and I have no idea how I would even try to do that.  But Wes did it and he did it very well.  This would be a great text for first year biblical studies students.  But more to follow once I wrap Empire Baptized and get the interview done.

5. The Ancient Economy by Moses I. Finley. 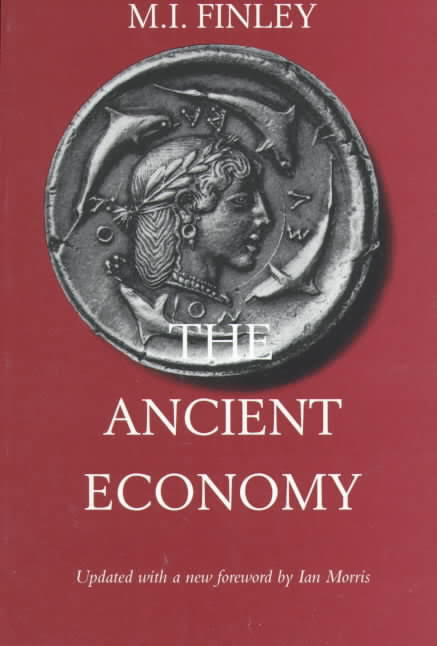 Finley’s book is another one that has been around a long time.  It always gets mentioned at some point when people turn to conversations around economics and the Roman Empire in the first-century CE, so I figured I sit down and read it as I continue to re-immerse myself in this kind of literature.  It wasn’t mind-blowing or anything but that’s only because of all the scholarship that has come after Finley and that has been inspired, in part, by Finley.  It’s probably fine to give it a pass at this point.  The subsequent literature seems to deal with it adequately and there weren’t any big surprises  or revelations waiting for me in the text as I worked my way through it. 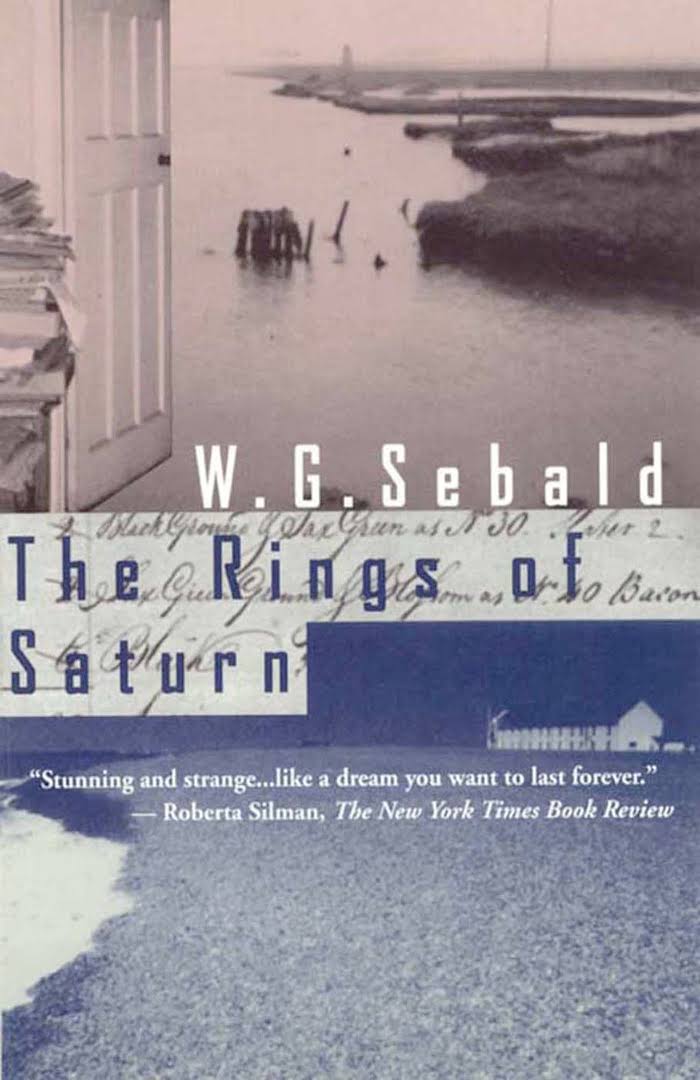 Following up on my plan to slowly read all of Sebald’s writings, I picked up his most frequently mentioned novel (which isn’t saying too much, I suppose, since he doesn’t seem to be all that frequently mentioned – but in the circles where he is mentioned, this is the one I see popping up the most).

I continue to really like his writing.  Sebald writes like someone who is hiking around a mountain in a fog.  He circles something vast, and is never fully able to describe it (or even look at it all directly, and the direct glimpses that do take place are ever only partial).  Yet this very act of circling and looking at something indirectly or only in part, seems to more adequately communicate the vastness of what he is writing about, than other approaches that try to communicate everything in one, big, powerful punch.

For example, consider how Sebald writes about monumental acts of human violence (this is perhaps the biggest mountain in this text, and the one that he circles the most) and compare that to how another author, say Cormac McCarthy, writes about violence.  McCarthy punches you hard enough to knock the wind out of you and make you cry… but after awhile you’re breathing normally again and the crying has stopped.  Sebald, though, doesn’t hit you this way.  He circles and he circles, he moves closer and backs off, he never quite gets there – to some fuller state of revelation – and you don’t end up gasping for breath or weeping.  Instead, you end up with a feeling you can’t shake for days and days.  McCarthy might traumatize you – but it is impossible to live in a permanent state of being continually traumatized.  We block trauma out, suppress it, give it meaning or a narrative, and find all kinds of ways to move around it or through it.  Sebald, though, unsettles you.  So much so that you’re not exactly sure how to be settled again – like a vision or a dream you had when you were awake that now makes you question what was real before things like visions or waking dreams were possible.  After your anchor breaks, it’s hard to know where to land when you don’t know which way is up or which way you are falling.

Tangentially, it seems to me that Sebald resonates with me in ways that Kafka resonates with others.  Kafka also feels like he is circling around something bigger… but Kafka’s something bigger has always struck me as a void.  It lacks substance and so it always kind of left me discontented… even though I’m pretty into the idea that the core of everything, ourselves included, is a void.  (So maybe it’s just Kafka’s tone that puts me off?  Or maybe it’s because Kafka was a dick and that kinda comes through in his writings, whereas Sebald seems to be a very gentle fellow? I’m not sure, especially given the observation that many authors whom I have enjoyed were top notch jerks in their lived lives.) 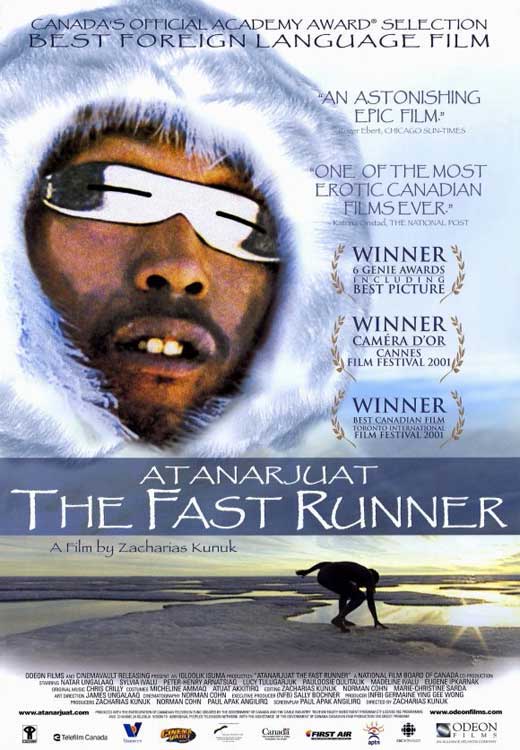 If it weren’t for one particular scene of sexual violence, this would be a very highly recommended movie.  However, I never feel I can recommend movies that contain sexual violence (I really struggle with the way in which the medium of film impacts the message regarding sexual violence, but I’ve gone over that and over that in other posts so I’ll say no more about it here).

Atanarjuat really is a brilliant many-layered film, telling a centuries-old Inuit story in the context of contemporary Inuit life (and it was written, directed, and acted in Inuktitut).  It shows many elements of what life is like in the Arctic.  It was a sensation in Nunavut — speaking to Kunuk’s desire to be faithful in his telling and presentation of the story as he received it from various elders — but also won the Caméra D’Or at Cannes.

Kunuk’s latest film,called Maliglutit (Searchers), dropped at the Toronto International Film Festival (TIFF) this year.  It’s based on John Ford’s classic Western by the same name, and I’m pretty keen to watch it.

1. People of the Kattawapiskak River (2012) directed by Alanis Obomsawin. 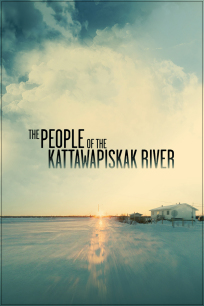 Alanis Obomsawin is a documentary film director whom I respect a lot.  Her previous work includes “Kanehsatake: 270 Years of Resistance,” which is about what Canada refers to as “the Oka crisis” but which is told from a much better perspective than the standard Canadian colonial point of view.  I’m also looking forward to watching here latest — “We Can’t Make the Same Mistake Twice” which premiered at TIFF this year.

This short film (50mins) provides context around the housing crisis experienced by the Attawapiskat Nation.  This was after Chief Theresa Spence’s fast during Idle No More, but before the suicide epidemic amongst the Attawapiskat youth hit national headlines.  For those who are unaware of conditions on Reserves in Canada, it’s a pretty eye-opening view.  Recommended viewing for Canadians especially but also for others trying to get their minds around what settler colonialism looks like in the present. 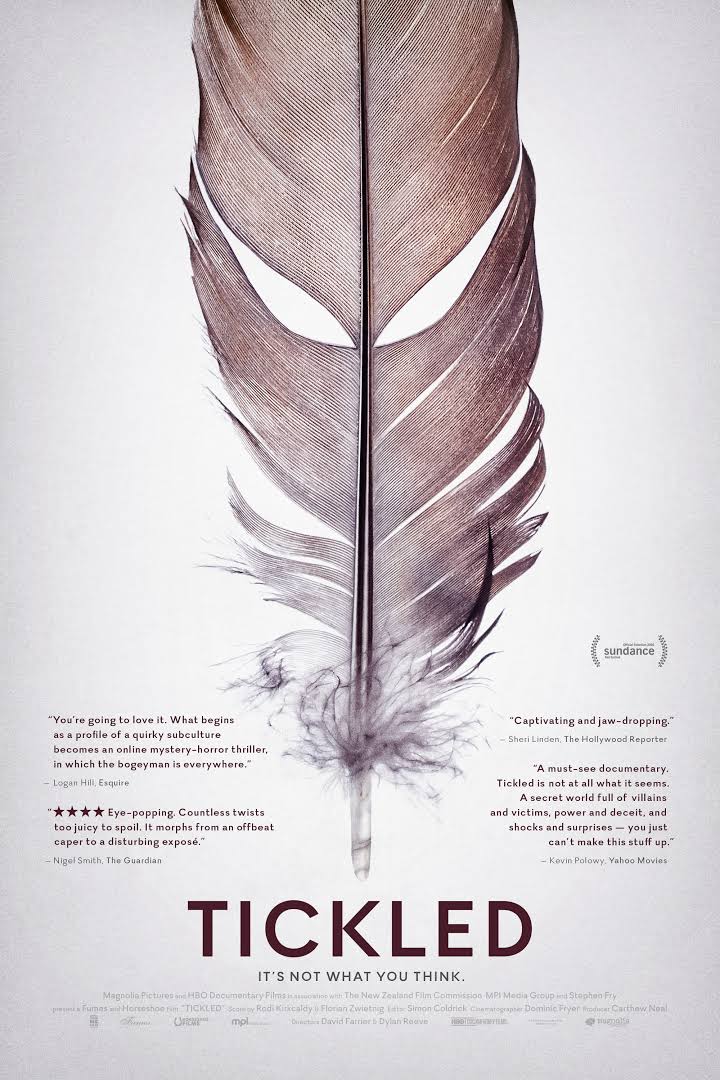 The world of competitive endurance tickling is not what it seems.  I don’t want to say to much about what it actually is because that would spoil the movie and it’s best to know as little as possible about this documentary before you watch it.  I made the mistake of reading just a bit too much about this doc before I watched it so it took some of the edge off for me.  It’s a good one to put on when you feel like something different and it’s a good one to follow-up on after you finish it because the movie is only a part of the story.  Suffice to say, if you get invited to join a competitive endurance tickling team, don’t do it.