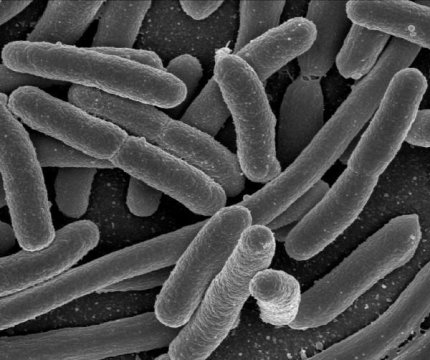 The colony of Escherichia coli (E. coli) nestled comfortably within the mucin glycoprotein covering the epithelium in the cecum of #2633148 at the new $660-million poultry processing plant in London, Ontario, was struggling. The niche it had carved for itself within the gut microbiome was increasingly being reduced in size due to incursions from neighbouring Peptostreptococcus, Propionibacteria, Bacteroides, Lactobacillus, and Eubacteria. To make things even worse, a recent invasion of Campylobacter jejuni caused a minor inflammation and brought a surge of beta-defensins—macrophages and heterophils—to the colony. While highly evolved, the beta-defensins don’t always discriminate and this, too, caused the loss of some E. coli lives as the permeability of their cellular walls were disrupted and lysis was induced. In layperson’s terms—they bled out.

It was a lot for the colony to take, although #2633148 seemed unaffected (the mucin layer of gallus gallus domesticus is better equipped than the mucous membrane of homo sapiens sapiens, and it is able to prevent Campylobacter jejuni from adhering to epithelial cells).

The members of the colony looked back to brighter days and cried out to God for help:

Remember, Lord, what has happened to us;
look, and see our disgrace.
Our inheritance has been turned over to strangers,
our homes to foreigners.
We have become fatherless,
our mothers are widows.
We must buy the zinc we absorb;
our glucose can be had only at a price.
Those who pursue us are at our heels;
we are weary and find no rest.
We submitted to Bacteroides and Eubacteria
to get enough adenosine triphosphate.
Our ancestors sinned and are no more,
and we bear their punishment.
Slaves rule over us,
and there is no one to free us from their hands.
We get our bread at the risk of our lives
because of the sword in the desert.
Our peptidoglycan layer is hot as an oven,
feverish from hunger.
Women have been violated in the gut microbiome,
and virgins in the epithelium.
Princes have been hung up by their membranes;
elders are shown no respect.
Young men toil at the millstones;
boys stagger under loads of D-mannose.
The elders are gone from the mucin;
the young men have stopped their music.
Joy is gone from our hearts;
our dancing has turned to mourning.
The crown has fallen from our head.
Woe to us, for we have sinned!
Because of this our hearts are faint,
because of these things our eyes grow dim
for our cecum, which lies desolate,
with Campylobacter jejuni prowling over it.

You, Lord, reign forever;
your throne endures from generation to generation.
Why do you always forget us?
Why do you forsake us so long?
Restore us to yourself, Lord, that we may return;
renew our days as of old
unless you have utterly rejected us
and are angry with us beyond measure.

And on December 25, 2021, God heard the prayers of the E. coli and he sent his only begotten Son to dwell as one of them within the cecum of #2633148. He was named Emmanuel, which is God With Us. And he came and he spoke of peace, and of love, and of caring for one another. But when #2633148 was stunned, bled, scalded, picked, decapitated, and eviscerated, he died.

But this was not the end. A memory of Emmanuel survived in the E. coli bloom that took place in #2633148’s final fecal deposit. A competitive exclusion culture was drawn from this fecal deposit and fed orally to chicks that had been born in incubators at the plant. This helped them to develop a healthy gut microbiome in an otherwise rather sanitized environment, but it also allowed the story to be passed on about the Escherichia coli who, although he existed in the form of God, did not consider equality with God a thing to be grapsed but took on a slave-like nature and the likeness of a bacterium, and who humbled himself by becoming obedient to the point of death, even death in a processing plant.